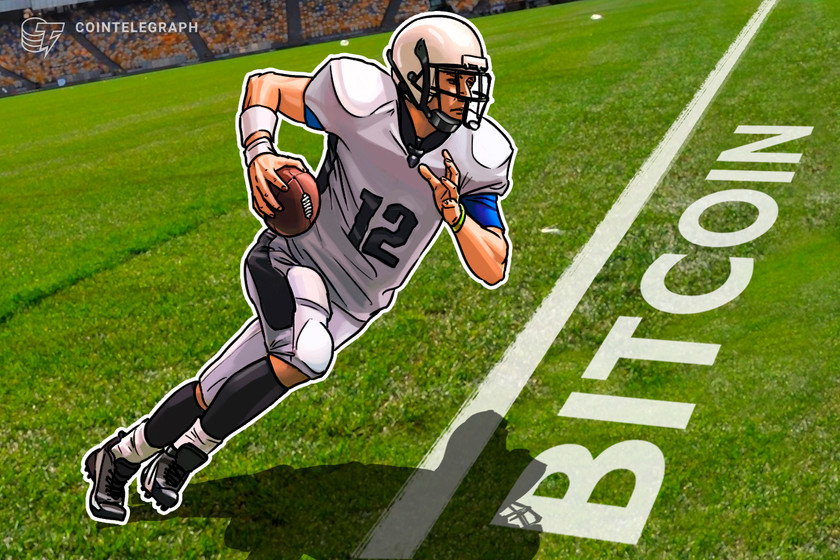 Tampa Bay Buccaneers quarterback Tom Brady nearly lost ownership of the ball behind his 600th touchdown pass, but now he’s paying for it… in Bitcoin.

In an Oct. 24 game between the Buccaneers and Chicago Bears, Brady threw his 600th career touchdown pass to fellow teammate Mike Evans — he is the only player in NFL history to have ever achieved so many touchdown passes in his career. The wide receiver, apparently not realizing the significance of the ball, handed it off to Byron Kennedy, a fan wearing a jersey with Evans’ namesake.

According to Ken Goldin, the founder of sports memorabilia auction company Goldin Auctions, the ball could be worth anywhere from $500,000 to $900,000. Kennedy at first seemed to give up the ball in exchange on a vague promise of a meet and greet with the quarterback. However, Brady later revealed on Monday Night Football that he had offered the fan 1 Bitcoin (BTC) — roughly $62,081 at the time of publication — as thanks for quickly handing it over.

“There were a lot of negotiations in order to get the ball back,” said Brady. “Byron realized he lost all of his leverage once he gave the ball away […] I’m also giving him a Bitcoin. That is pretty cool, too. At the end of the day, I think he is still making out pretty.”

According to Tampa Bay Times reporter Rick Stroud, the Buccaneers have also agreed to give Kennedy 2 signed team jerseys, a helmet with Brady’s autograph, Mike Evans game cleats, a jersey signed by the wide receiver, season tickets for the rest of the year and through 2022, as well as a $1,000 credit towards purchases at the team’s store. Even with some experts predicting the BTC price is likely to rise, many online pointed out the value of Kennedy’s compensation did not come close to that of the historic football.

“I would have gone for season tickets for life,” said investigative reporter David Amelotti.

Related: Football-focused NFT platform plans to kick off in style, with some big names

Brady is one of many crypto-friendly professional athletes. He launched his own nonfungible token platform called Autograph — where he plans to auction the 600th touchdown ball as an NFT — and received tokens as part of an endorsement deal with crypto exchange FTX.